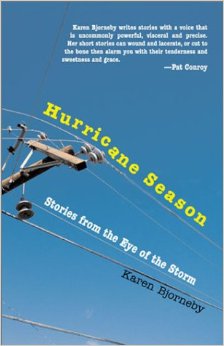 “Newcomer Karen Bjorneby strikes no compromises in her first collection of fiction, “Hurricane Season.” These bold, ambitious stories chart the emotional territory between men, women and God. Many, set in the South, bring to mind the work of Flannery O’Connor, with whom Bjorneby shares a sense for drama and a gimlet-dry wit. Touched by tragedies large and small, her characters struggle with faith and find that it is often in conflict with more earthy, urgent passions….Other stories, featuring younger characters, take place on military bases (Bjorneby is the daughter of a fighter pilot) and show children struggling to deal with a life of constant upheaval. Inevitably, some characters fare better than others, but all remain sympathetic despite their considerable flaws. Bjorneby rarely strikes a false note in this impressive debut: No story is less than interesting, and a few are real gems.”